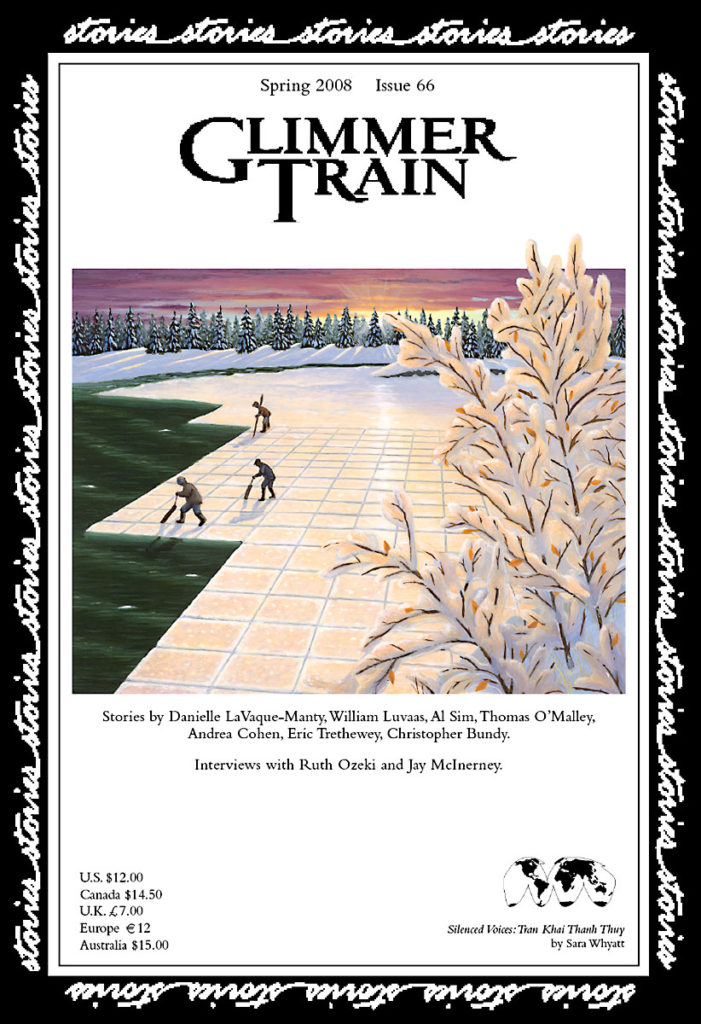 William Luvaas
Ashes Rain Down
Ashes pile in drifts against fences, turn our lawns calcium white, make a foul, acrid soup of water in dogs’ bowls. They sift down collars, creep through walls, and form a fine pellicle over the furniture.

Thomas O’Malley
Monstrum
There were no more Apollo rockets. I was thirteen now, and it had been three years since mother had taken me from The Home and over a decade since the last Apollo astronaut bobbed on a tethered spacewalk or toddled, unsteady as a child, upon the moon.

Christopher Bundy
Walking on the Moon
Ivan Karnow leaned into the foyer of his thirties-era bungalow, one foot in, one foot out, the smell of garlic and ginger familiar.

Ruth Ozeki
Interview by Kyoko Amano
As you can imagine, we have these things that we care about passionately, but if you die too quickly, if you die too soon, you’ve got all these unfinished projects.

Al Sim
Soledad
Enough sunlight filtered in for Rico to see what he was doing, so he left the lights in the big room turned off. The weather was unusually cool, so the swamp cooler was off too, and the windows all stood open.

Andrea Cohen
The Pretty Lady Brand
Back when we were having trouble, Inge planted three hundred bulbs in the backyard. She tucked them into the rock-studded earth one bleary afternoon just before the ground froze. Later she said, “I didn’t know if I’d be here when they came up, but I figured seeing those flowers might be nice for you, might make you happy.”

Eric Trethewey
Jefferson Street
His large jowls spread out from beneath a railroad cap, and he got progressively wider all the way down to the ground. His legs spread apart, like the legs at one end of a sawhorse, to support his tremendous weight.

Danielle Lavaque-Manty
The Safety of Milk
She’d begun saying this soon after their wedding, whenever she grew anxious about something he planned to do.

Jay McInerney
Interview by Victoria Blake
I think one of the things that I discovered for myself and subsequently exploited in the book was that the second-person singular is the most common form of our interior monologue. When you look into the mirror after you’ve done something stupid, you don’t say, “I idiot,” you say, “You idiot.”