Renegade Tribe: The Palouse Indians and the Invasion of the Inland Pacific Northwest 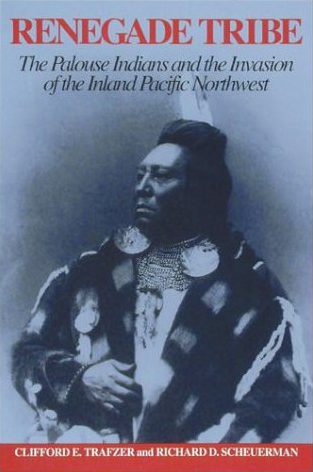 Trafzer and Scheuerman’s Renegade Tribe is a highly informative and interesting history of the Palouse Indians of eastern Washington. The book begins with Lewis and Clark’s first contact with the tribe. It then covers each major conflict that occurred between whites and the Indians over the next century. It includes the early interactions with trappers and merchants, outbreaks of disease, the Whitman killings, the Walla Walla Council, the Yakima War, the Jesuit influence, the strengthening of the Washani (Ghost Dance) faith, the Col. Steptoe boondoggle, the Col. Wright campaigns (Battle of Four Lakes, killing of the horses, hanging of Indians, etc.), the dividing of the land into reservations, the Nez Perce War, the Indians’ transition into homesteading, and the final, sad outcome of the Indians being almost entirely removed from their ancestral homelands by the early 1900s.

The Palouse Indians shared a language, family ties, and frequent interaction with other neighboring tribes (Yakima, Nez Perce, Umatilla, Spokane, Coeur d’Alene, etc.). Therefore, the book also covers a lot of information about these other tribes. There’s a lot of information about the lives and fates of such Indian leaders such as Kamiakin, Tilcoax (Wolf Necklace), Peopeo Moxmox (Yellow Bird), Chief Joseph, and others. There’s also some discussion about internal tribal politics and the factions that cemented and divided the tribes throughout the period. By John E. Lemmon.