By the mid-1950s, the Inland Empire had possibly the worst air quality in the nation. A thermal inversion trapped particulate pollution, ozone, and other pollutants against the region’s hills. Every day the on-shore airflow from the ocean picked up the smog and pushed it east, until trapped by the hills, it sat until the off-shore flow pushed it back west overnight. As the region grew, warehouses and distribution centers occupied a large niche in the area’s economy. These businesses added to the existing air quality issues and people in their immediate environs began to experience health effects. The air, however, was not the only pollution that concerned the region. Industrial waste taken to a state certified disposal facility in Glen Avon began to attract national attention when storm water sent a chemical soup flooding into the neighborhood. The Stringfellow Acid Pits one the nation’s major US EPA Super Fund sites. Many of the women of “Making Waves” made air quality and pollution issues for activism. 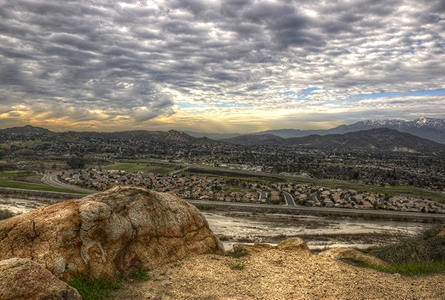